Aldwynn is a location in Death's Gambit.

Aldwynn is an abandon dark city divided into many parts. In Aldwynn, players are able to take different paths to proceed through the Area by either going to the City filled with the corpses or traverse the Sewers filled with dangers lurking in every corner. The Player will encounter several corpses lying around in the streets of Aldwynn and multiple enemies that will try to stop the player from passing through. The Immortal in the Land of Aldwynn is currently unknown. 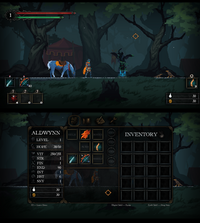